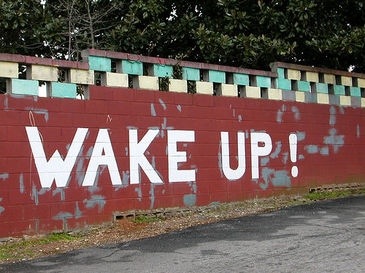 God is so patient with us, isn’t He? We stumble; He’s there to catch us. Even after the 17th time. We fear the worst waiting on the test results; He reassure us. We’re caught doing something so incredibly stupid, for lack of a better word (Just don’t tell my kids I said that. Kendyl will fuss at me. She’s mama # 2 at the Jones house.) and our Maker is waiting for us to ask forgiveness and make us new. Again. And again. And again. We build these elaborate manmade kingdoms and they crash before us like little sand castles when the tide rolls in. And He’s there to guide us next time if we will let Him.

What’s so awesome about His love is that He doesn’t let us get by without sending us warnings. Red flags are strategically placed in our path, but so many times we skate past them. Barely flinching. What’s so sad about our culture is that if something isn’t right up in our face, it doesn’t have much impact on our life. Red flags are harder to see because we haven’t paid them much attention and forget what they look like. MTV is a wasteland of reality tv that flashes such strong immorality and filth in our teen’s faces and they’ve seen it over and over that it no longer has an edge. It’s natural. It’s become common ground. And that terrifies me.

I don’t feel like I’m crazy old and washed up and am out of touch with reality. I’m 24-years-old. Almost 25. Gasp. Can we have a moment of silence? ……….. Whew. But commercials on tv and billboards make me so sick. How have we gotten to this place? We have made life all about the moment. YOLO. (You Only Live Once. No charge for those sheltered people who needed a definition. You’re welcome.) We do what makes us feel good at that moment until the pain of life subsides and will do something more drastic when that no longer brings us pleasure.

It was no different in biblical days. I’m a little reluctant to call them “biblical days” because the bible will always be applicable to our lives, but we’ll call them that anyway. King Nebuchadnezzar was warned in dreams that his manmade kingdom was fleeting fast. Daniel was the gutsy man who wasn’t afraid to share God’s meaning behind the dreams. King Neb was prideful. God brought him down quickly and he found himself in the wilderness with wild donkeys. I personally do not recommend this process for humbling. But if you’re that stubborn, it may take a few hard kicks in the butt for you to come to your senses. I’d place Neb in the top 10 of his graduating class at the School of Hard Knocks and Hard Heads.

It was no secret what King Neb went through. His son, who later took the throne, followed in his daddy’s footsteps. He actually threw a party and used the gold and silver to eat out of that his daddy’s men had taken from the temple of God in Jerusalem. No respect for the house of God or His things. Sound familiar? As they filled themselves with food and wine and praised the “gods,” suddenly this human hand comes out of nowhere and starts writing something on the wall. The spoiled brat king turns white as a ghost and sends for people he thinks can give him some answer as to what was happening. Like his father, he trusted in his sorcerers and astrologers. But they didn’t have a clue. In yo’ face!

The queen is either a wise woman who has kept her mouth shut or finally comes to her senses and reminds the king of Daniel, the Dream Man. Daniel is summoned and the king tells him that he’ll give him a fancy purple robe, some gold bling and make him third ruler in the land. Daniel shrugs him off and tells him to give his gifts elsewhere and proceeds to tell him the meaning of his dream in three bullet points. “1 – God has numbered your days of reigning and brought them to an end. 2 – You have been weighed and found wanting. 3 – Your kingdom has been divided and given to Medes and Persians.” The crazy thing is – he was killed that night. (All of this is found in Daniel chapter 5.)

God will send people and warnings our way to try to help us, but it’s up to us to accept them. We can look at them and realize it’s not a coincidence or shrug our shoulders and keep on trucking. I hate to say this, but our country is going down the toilet. We have tied up our morals and stuffed them in the back of the closet. And we’ve dared anyone to say a thing about it. We have shunned the Daniels and Josephs and tried to shut them up because we don’t want to hear the truth. Tell me what I want to hear because it makes me feel good.

My love, don’t grieve the heart of God. He loves you so much more than you give Him credit for. He gave everything He had in hopes of reaching your heart. That car that came inches from t-boning you? Maybe that was your wake up call. You losing your job? Maybe it was for your protection, or maybe to see how much you trust Him. Don’t wait for the writing on the wall to scare your pants off. Clean out your ears and listen for His voice. Now.

I'm just a wife, mom, and daughter of the King! Life Unscripted Ministries is just about living life by letting go of the steering wheel and letting God take control. Lay down your plans and desires at the feet of Jesus and see the amazing things He has for you! Watch Him speak through the little, day-to-day things in such powerful ways! View all posts by lifeunscriptedministries